Adaptation to a variable environments

Vernal pools flood over the rainy season and can remain flooded for several months. Lasthenia seeds germinate as the rains begin (Oct-Nov) and some survive as seedlings, underwater, until the water level drops in April-May. The plants quickly bolt and set seed before the dry season fully sets in. Lasthenia species inhabit different depths from the base of the pools to the surrounding upland, and thus experience environments that can be very different hydrologically, some with predictable variation, and others with more stochastic variation.

Lasthenia burkii (Burke’s goldfields) and L. conjugens (Contra Costa goldfieds) are endemic to the Delta Bay Region of California. Due to development and agriculture, their distributions have been reduced to a handful of naturally occurring populations plus a small number of mitigation sites with human-created vernal pools.

To facilitate conservation efforts, the aim of our study was to summarize the genetic diversity of each species and to make recommendations for habitat mitigation projects by comparing the performance of different seed sources. We are currently in year 2 of our study, which consists of three parts:

To understand patterns of plant distribution and the key ecological factors that determine why certain species are where they are, we conducted greenhouse experiments using three Lasthenia species that are associated with vernal pool habitat. Lasthenia californica is an upland species, L. glaberrima grows at the bottoms of pools, and L. fremontii is intermediate. We simulated vernal pool hydrology by manipulating water level means and variation to ask: Do species perform best in the conditions that are similar to where they are found naturally? We also manipulated competition to see what effect it might have, as previous work in the Emery Lab has shown that competition can significantly alter fitness patterns across species. In addition to plant fitness, we are also looking at the effects of these hydrological environments on physiological traits, including leaf aerenchyma and stomatal measurements.

For this project, my primary contribution was to organize and implement a large field experiment at Jepson Prairie that will run for three years. This study will test the fitness consequences of seed dispersal at different distances for three Lasthenia species that occupy different niches within the vernal pool complex.

Asclepias flowers are unique among all flowering plants. They have:

To understand how these unique flowers might be adaptive, I focus on six floral traits (Fig. 1) and relate trait measurements to plant fitness in populations of five species (Fig. 2) to ask several questions—Do any of these traits have a direct effect on plant performance (fitness)? Are the same traits under selection in different species? Additionally, given that hermaphroditic plants have female fitness (they produce seeds) and male fitness (they sire seeds through pollen movement), I also address the questions—Are the floral traits under selection through male or female fitness, or through both? Do these traits function to directly help pollen removal or deposition? And then finally—Does selection differ across years?

Thus far, we’ve found that in a study of three species (Asclepias tuberosa, A. syriaca, and A. viridiflora) traits tended to function in only one sex, so traits influenced either pollen deposition or removal. Further, those traits tended to affect reproductive function by affecting pollinator efficiency rather than by attracting more pollinators. We found no significant link between female pollination success and female fitness in any of the three species; this pattern is consistent with fruit production not being limited by pollen deposition. More on this can be found in La Rosa and Conner 2017.

I also performed paternity analyses of all fruits in a population of A. exaltata and A. incarnata to be able to measure selection on these floral traits through male fitness, in addition to female fitness. We are again finding that selection through male and female fitness rarely conflicts. Results from this study will be available soon! 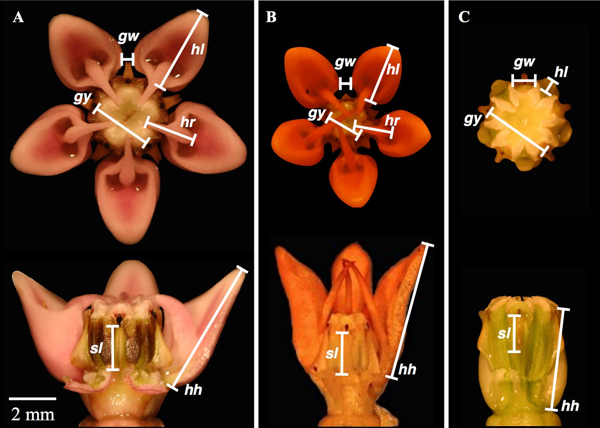 Figure 1. Top and side views of (A) Asclepias syriaca, (B) A. tuberosa, and (C) A. viridiflora flowers showing the six floral traits measured: gy, gynostegium width; hl, hood length, hh, hood height; hr, horn reach; sl, slit length; gw, gap width. Note that hoods are greatly reduced and horns are absent in A. viridiflora. Two and a half hoods were removed for the side views in (A) and (B) and two hoods were removed from the side view in (C). The petals are excluded. Bar = 2 mm. 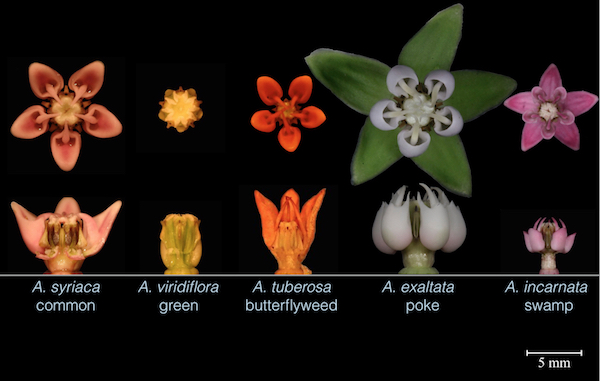 To complement the studies of contemporary selection above, I measured floral traits on 111 North American Asclepias species to be able to ask questions about possible trait correlations and causes of floral evolution. Three questions we are addressing are: Are there patterns of trait evolution that might indicates past selection? Has there been convergence on particular phenotypes? Were traits evolving in response to bioclimatic conditions?

Thus far, our data are showing several patterns. The first is that hood and gynostegium traits have converged on at least four phenotypes. When looking at possible biotic selective agents, these traits do not determine the proportion of hymenopteran species that visit each Asclepias species. Temperature, however, may have influenced the evolution of those two traits, gynostegium width and possibly hood length, so abiotic factors may have been the primary selective agents. Other floral traits (e.g., slit length) that are more likely to only affect pollinator efficiency may show stronger correlations with biotic variables.